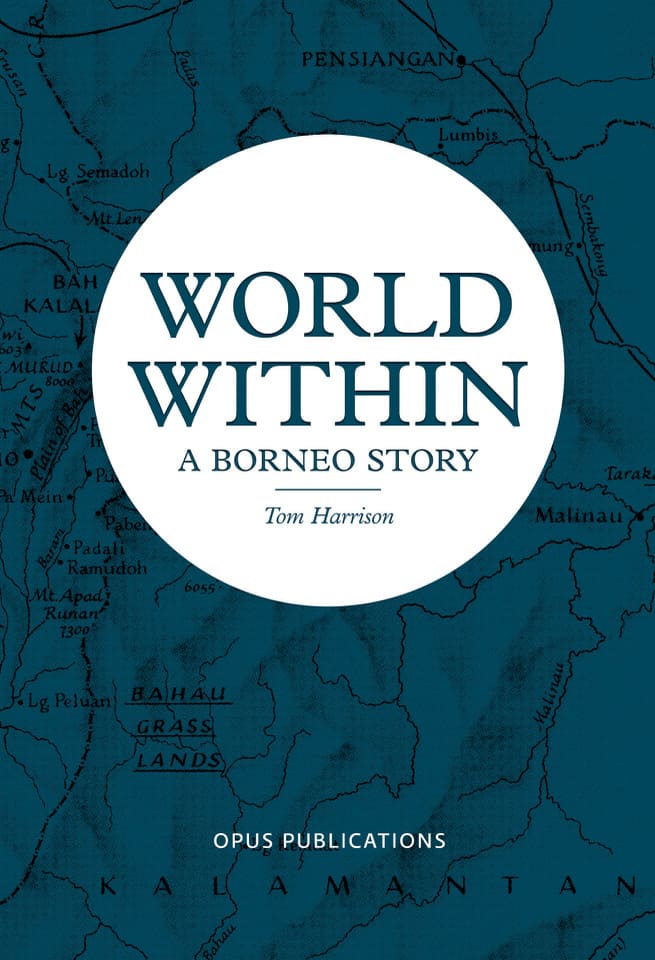 World Within: A Borneo Story (Reprint)

Tom Harrison is now widely known as a Television personality, notably for a recent series of six TV films, ‘The Borneo Story’, made with Hugh Gibb and shown all over Europe and America – one of them, ‘Birds’ Nest Soup’, won the Cannes Film Festival Grand Prix, 1958. To a somewhat small and very discerning public he has been known for years as an outstanding traveller (for his few years among cannibals in the Pacific he won a Royal Geographical Society Award, in 1935); as a pioneer in new methods of social and market research (with Charles Magde he founded Mass-Observation, the first realistic movement to study the people of Britain as objectively as if they were cannibals, in 1937); as a leading ornithologist, long-time radio critic (of the Observer) and author of Savage Civilization.

During the war, Mr Harrison did a series of important jobs in civilian and naval intelligence before performing with supreme unimportance the functions of an infantry private. Later, via Sandhurst and the Recce Corps he joined S.O.E., and ended up by jumping into Japanese-held Borneo – the first white man to do so. (For this feat he received the D.S.O. and other distinctions.) He landed, as he puts it, on his backside at highest inhabited point in that great islands, the Kelabit village of Bario – a whole community living inside one great ‘long-house’, without walls, without privacy, but with an immense virility and variety of cultural and material wealth – and of human personality.

Tom Harrison led the hill tribes of Borneo to war, then stayed on to lead the far interior back into ways of peace. In fact, with a few breaks, he has been there ever since – latterly as Government Ethnologist and Curator of the famed Sarawak Museum. Today he lives happily in Sarawak, in an old wooden house with a German wife, assorted Dayak retainers, five tortoise-shell cats and three orang utans. But for much of the year he is travelling. And as often as possible the revisits his beloved hinterland.

This book, the first he has written in sixteen years, tells a story of Borneo’s remarkable interior as it was before the white man came, living remote, vivid and often violent; then of those strange and stirring events which followed upon the sudden rain of parachutists from out of the equatorial sky. Adventure, humour, tragedy and anthropology are intertwined in a book unlike any other known to us. World Within is a story exceptional in its kind. No one else has had so deep and wide an experience against which to savour, enjoy (sometimes reject) the high evergreen, teeming, intricate world inside Borneo. No one else could have written it.